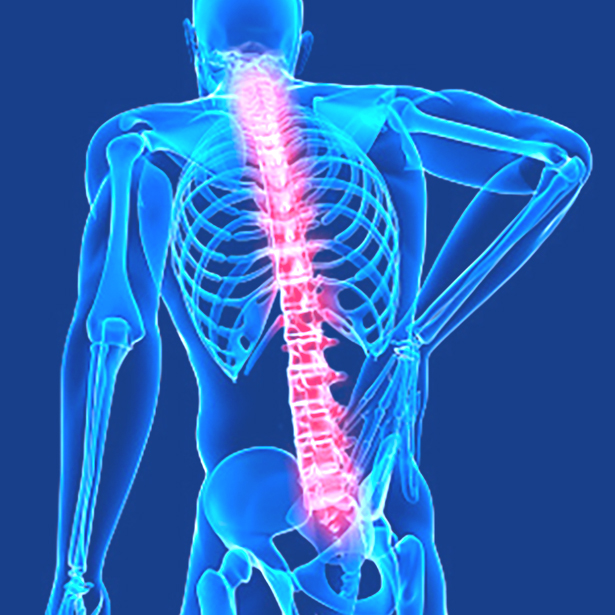 Posture is not the only cause of mid back pain. Injuries due to trauma or repetitive movements are another source. In short, no one is immune from these injuries. From people who work at a desk to those who paint houses, anyone can become affected. See your chiropractor to discuss management options.

If you view a normal, healthy spine from behind, it appears to follow a straight, vertical line. In truth, almost every spine has a minor, insignificant curve of 3 to 10 degrees. However, any curve greater than that is considered abnormal, and may indicate a condition called scoliosis.

Scoliosis — from the Greek word skol, which means twists and turns — causes the spine to form a C- or S-shaped curve. Similarly, the bending or twisting associated with a scoliotic spine can lead to the formation of a hump on either side of the back. Early detection of scoliosis usually occurs when someone notices a raised shoulder or shoulder blade, that clothes hang unevenly or that someone has more obvious postural changes and their spine leans more to one side than the other.

The condition almost always starts in childhood, typically as children enter their rapid growth phase just before and during adolescence. According to the National Institute of Health, of every 1,000 children, three to five develop spinal curves that are large enough to need care. Mild curvature occurs almost equally in girls and boys, but more severe scoliosis is 10 times more likely to occur in females than in males.

Structural scoliosis is much more serious and develops as a result of unequal growth of the two sides of the vertebrae (spinal bones). As noted, structural scoliosis involves both a side-to-side curve and also a twist or rotation in the spine. Unfortunately, the condition is irreversible and, in 65% of cases, the cause is unknown. Current research is focused primarily on genetics — at this point, however, there is no definitive evidence to support the theory that genetics is responsible.

Researchers have also looked at the role the hormone melatonin may have on the progression of spine curvature in patients with structural scoliosis. Some studies have shown that a melatonin deficiency may be associated with an acceleration of the condition. Other possible causes include birth defects, such as spina bifida (an abnormal opening in the vertebrae where the bones have not joined and formed normally), and muscle paralysis or deterioration from diseases such as polio, muscular dystrophy and cerebral palsy.

Both forms of scoliosis develop in the mid back (thoracic spine), low back (lumbar spine) or, most commonly, in a combination that results in an S-shaped bend. Mild cases of scoliosis are usually painless, but both types can cause patients to fatigue after extended periods sitting or standing. Even though it is less serious, functional scoliosis is generally more painful because it is more likely to be associated with muscle spasm and other biomechanical problems.

The prognosis for either form of scoliosis is better the earlier it’s detected. For that reason, the American Academy of Orthopedic Surgeons recommends that girls be screened twice for scoliosis, between the ages of 10 and 12, and that boys be screened once at age 13 or 14. Girls should be screened earlier because they generally reach puberty earlier than boys. If they’re diagnosed with scoliosis before their menarche (first period), they often have a better prognosis.

Although scoliosis most commonly appears around adolescence, there is a rare chance it can begin in adulthood. In such cases, it can be a result of an earlier curve that went unnoticed or untreated, a failed operation or a spinal deformity that occurred later in life. Adults who had scoliotic curves as children may find their symptoms worsen if they suffer from osteoporosis, a degenerative bone disease. In adults aged 50 or older with degenerative or osteoporotic disorders, scoliosis can also exacerbate chronic and severe low back pain.

If you suspect that you or your child has scoliosis, the worst thing you can do is ignore the signs. In most cases, the longer you wait, the more severe the condition will get, so it’s important to visit your healthcare practitioner as soon as possible. If the diagnosis is confirmed, he or she will look at three factors to determine the likely progression.

The second factor is a patient’s age and skeletal maturity: younger children are more susceptible to deformity as the bones in their spine are less mature and stable.

The third factor is the patient’s sex: females have a greater risk of developing severe scoliosis than males.

Once your healthcare practitioner determines the severity of the scoliosis, he or she may need to make a referral to a medical doctor for a consultation. In many cases, medical treatment may be necessary to provide patients with the most comprehensive management.